This document briefly introduces you to the new project template for projects that use the Core Data storage technology. It complements the in-class introductory coverage of Core Data.

The purpose of this document is to provide you with information. A separate “how to” document will show you how to use it for a new project.

In the course’s GitHub repository, in the Templates_and_solutions folder, you will see a project named TemplateCDv1.

Make a copy of that, and you will have all you need to start working on a new project.

How do I make a copy?
The “readme” file in the project helps you do this.

How to use the template

This topic is documented in a separate noted titled:

What is the design of the template

We have prepared a diagram that illustrates the design of the template. Click to open it full-size in its own tab/window: 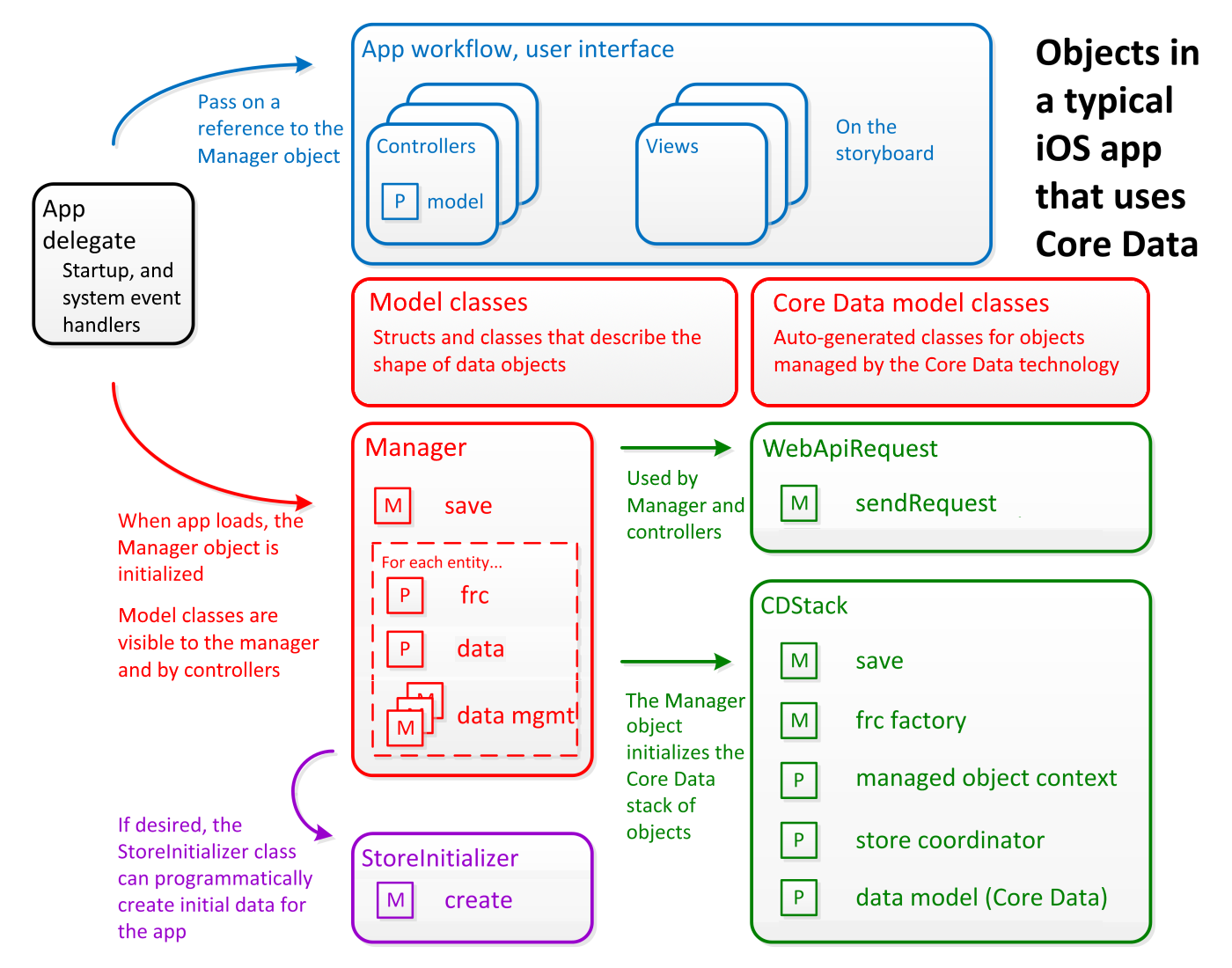 In the recent past, we have been familiar with a simpler version of the diagram. As you can see, this new diagram includes the web API request and Core Data technology bits. The following explains the diagram and the code assets in the project template. Make sure you have both open when reviewing the following sections.

As you know, the app delegate class is the app’s entry or start point. It also has methods that handle system-wide events (e.g. an incoming voice phone call interruption).

As you have learned, it is the ideal place to initialize and prepare data for the app. That’s what is happening here.

It creates an instance of the data model manager class, and passes it along to the app’s first active controller.

For many weeks, you have known that the role of the manager class is to centralize methods that do data service operations (fetch, add, change, etc.). That role remains the same.

The make-up of the manager is influenced by the use of Core Data. It creates and manages something called the Core Data stack, which is the set of objects that implement Core Data. It also publishes the important “context” property, which is how all code - in the manager and in other controllers - use Core Data technology.

The manager’s source code is actually split across two or more source code files. The base manager class is quite simple, with the “context” property, and methods for saving the context, and a “factory” for creating a fetched results controller.

As noted above, the manager’s source code is split across files. Each additional file is a Swift extension. The reason for this is to avoid having one huge (hundreds or thousands of lines of code) manager class, and to isolate per-entity methods in per-entity source code files.

Notice that each extension begins with:

Study the methods in an extension. They should be understandable. (If not, ask.)

The WebApiRequest object is used to make a request to a web API resource. It is created from a factory class, and it can be used by the data model manager and/or controllers.

As noted above, the Core Data stack is the set of objects that implement Core Data for an app.

The CDStack object is a set-it and forget-it object, in that it gets created when the app is loaded, and we just end up using its context.

What is the context? Well, as explained in class and in the textbook, it represents a single “object space” or “temporary work area”, or a “scratch pad” in an application. Its primary responsibility is to manage a collection of in-memory objects. When we are ready to save changes to persistent storage, we call the “save” method on the context.

When we do a “fetch”, the results are fetched from persistent storage, and are placed in memory in the context. Then, for example, we can display the results (on a list).

Similarly, we can make changes to an object that is current fetched to the context. Again, we must save the context.

If we want an app to get to a user WITH some starter data, we can do that. One way is to programmatically create starter data in a class like the store initializer.

Later in the course, we will learn other ways to create sizeable amounts of starter data, by importing data from a JSON file (for example), or fetching it from a web service.

These classes describe the shape of data. For entities that are NOT part of the Core Data storage scheme, we create simple structs and/or classes to describe their shape.

For Core Data managed entities, we use the Core Data model editor to define and design entities, their attributes, and relationships (if any). The editor works with a source code file that has an xcdatamodeld extension. Here is a definition for a simple entity named “Example”:

The Core Data model editor automatically generates a class for each entity that we design. (The generated code is in a file that’s in an area of the project that’s reserved by the builder/compiler.) That enables us to use code like the following:

Familiar controllers and storyboard scenes are in this area.

The app delegate passes on a “manager” reference to the first active controller. Then, this reference must get passed on to all other controllers.

“List” controllers (typically of type UITableViewController) that get their data from the Core Data technologies will use a fetched results controller, for which we use the initialism “frc”.

An frc is a wonderful and awesome object. Among other features, it efficently manages the results from a fetch request (see below for info about that), and organizes the results in a way that easily binds to the table view cells. It also automatically updates the list (table view cells) if/when data changes.

The frc is usually configured in the viewDidLoad() method.

One of the objects inside an frc is a fetch request. As its name suggests, it describes the search and delivery criteria used to fetch data.

This kind of criterion is known as a predicate.
To us, a predicate looks like a string:
attributeName == "foo"

For a result set with more than one object, you can choose to sort/sequence before delivery.

Alternatively, or in addition, a controller can also use a web API request object to get its data.